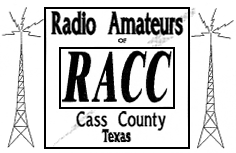 Two of our members (Don, N5PYB and Ben, KB5UOB) have recently been in the hospital but bother are now home and doing fine.  Both of you were missed on the 98 machine and we are certainly glad you are having a speedy recovery.

During the last membership meeting, we agreed on a couple of items of interest to all members.  We agreed to make the newsletter a quarterly publication unless there is a special event requiring a special issue.  This will allow us to pass out club information in a reasonable length of time and reduce cost.  We also agreed to begin weekly nets on Thursday nights after the time change.  More on this below.

The Mobile Command Post has now been secured and is now a reality.  Gary, Mark and Johnny have worked hard to obtain the vehicle and were fortunate to find one that had previously been set up as an emergency communication vehicle.  It ain't pretty on the outside yet but the inside has many features that will save numerous hours of installation labor.  The vehicle will be at our October 29th meeting for everyone to see and details and plans for the vehicle will be provided at that time.  Congratulations to the guys who pushed this through and we all look forward to working on this project.

The number of newcomers receiving their first Amateur license continues to increase dramatically.  For example, in 1991, the first year of the no code license, 7161 Technician class joined the ham ranks.  So far in 1992, over 17,000 have received Technician license and the numbers continue to grow.  There has also been an increase in Technicians upgrading to higher class license, so things are look good with our hobby.

The October meeting will be held at the Atlanta City Hall, October 29th at 7:00 P.M..  We will have an introduction to the "Instant Command System" which is used by the Forestry Service, Law Enforcement Agencies, and other organizations during emergencies.  Mr. David Abernathy of the Texas Forestry will make this presentation.  We will not have the normal club business, including elections, at the October meeting because of the special program, but will resume normal meetings in November.

The November and December meetings will be held at the Hot Biscuit, on the dates and times indicated.

The Diamond antenna is in place and working very well thanks primarily to Johnny Duncan and the rest of the crew who helped with the installation.  Next step is to install the old repeater antenna on the hospital and the repeater committee plans to complete this in the next month.  The repeater took a partial lightning hit on Sept 3.  We lost the power supply and some other components, so the repeater is running on battery power now.  Joe has loaned us a power supply for the repeater and we plan to put it on line soon.  We hope to recover some of the expense for the lightning hit with insurance, but no commitment from the insurance company at this time.

The V.E. Team has now conducted three testing sessions and we have received "At-a-boy letters" for submitting packets with no administrative errors.  This is important, as it means no delays will be experienced in receiving a ticket because of testing errors.  Herb Stark, K5GAB, has joined the VE Team and has done an outstanding job.  Robert, WD3T, who lives in Doddridge, AR will also be joining the team soon.

Here are some real important people who have accomplished significant milestones recently:

James, John and Darlene all attended the code school and we are especially proud of their dedication and hard work on attaining the 13 wpm.  We are considering starting another code school in November.  Please let Don or I know if you would like to attend, so we can determine if there is enough interest to have another class at this time.

The October net will be conducted on TUESDAY, OCTOBER 27, at 8:00 P.M..  Johnny Duncan will be the net control on the 27th.  We are having the net on Tuesday because of the meeting on Thursday, October 29th.

We will have the net every Thursday night at 8:00 P.M. after the time change, so the first WEEKLY NET will begin NOVEMBER 5, 1992.  Net Control will be rotated.

Lynn will be the Chairman of the Banquet Committee for December and will be calling on some of you for ideas and help.

There will be a Hamfest at Fairfield Bay, AR on Oct. 31st and at Mt. Pleasant, Texas on November 14th.  Both of these will be good ones.